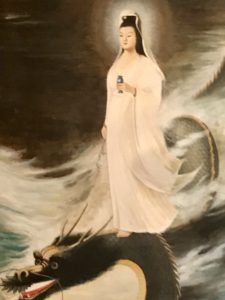 I lie in bed in the mornings, awakened by the early spring light, thinking about faith and grace – not unusual I suppose for my age. I have had the good fortune to bear witness to friends and acquaintances lives over a forty-year period. It’s most striking with people I haven’t seen for a while who post in Facebook about daily occurrences. The close family ties and deep friendship bonds that tie people together moves me. Many have not moved far from their childhood roots; thus, planted firmly in their beginnings those ties take on a spiritual grace. Some have strong religious beliefs that carry them through the good and bad. Some have faith that what has been will always be.

As a teenager I tinkered with religious faith to fill a void. It was short-lived, but I became fascinated with how religion differs from spirituality. Initially, it was triggered by an event when I was twenty-three after Katie was born. My mother said she would have to be baptized or she would go to hell or some such nonsense. To please the family, I called a Presbyterian minister in Princeton, NJ where I was living at the time, to inquire about the process. He came to the house, I suppose to see if we were fit enough. He asked many religious questions that I couldn’t answer because Presbyterians aren’t really schooled in such things. He did ask me if I believed that Jesus Christ was the son of God. Being a literal sort, I said not really, and he told me she couldn’t be baptized until I had more faith – and off he went – and she has never been baptized.

Raised Presbyterian, which is barely a religion, I envied my Catholic friends who got to participate in their Sunday rituals: genuflecting, prayers in Latin, crackers and wine as symbols of spirit, confession. As an adult, I learned about the sins of Catholicism, but it never negated my fascination with ritualistic practices that provide comfort and focus to people – or they wouldn’t do it.

It wasn’t until my 40’s that I learned how rituals help people connect with spirit and transcend, for a moment, the banality and sorrow of their lives. Though I always envied others devotion, I never felt the yearning, transcendence or mercy contained within rituals until the Owl flew into my world in 1987 in Westwood, CA. I won’t repeat the story here as I have written about it, but it was the first time that a physical experience became the symbol for a serious spiritual journey. Because I am a doubter and cynic, it took a physical manifestation to ignite that awakening;
yet, with all my studying and practices, trying to connect through shamanic ritual and other ceremonies and practices, none of them held me as I tried to make sense of my world.

The last six months I have been pulled again to the earth and the garden behind the house. It is my canvas where I can create big things that take on my life-force as they create their own. The triangle sculpture that baffles most people took on my energy of all the bad things and bad people that had inhabited my life and released those energetic forces into the earth and into the heavens. Like an art/earth exorcism, I was freed. The owl circle is my homage to the invisible forces, what we call guardian angels or spirit helpers. 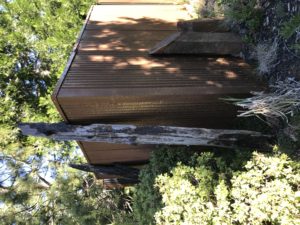 I originally thought about a Tree of Life garden as I resonate with the Kabbalah, it’s mystery and inclusiveness. I didn’t expect or plan or foresee that meeting Master Zhang would change that. I had dabbled in Asian philosophies and religions but was never called into deeper relationship with it’s patriarchal foundations – the same reason I rejected Christianity.

What originally captured my interest in Chinese spiritual traditions was that it never had a creation story. The Tao, Confucianism and Buddhism are quite vague about the why and how of it. They view creation as the consequence of coming into being between two primordial forces: yin and yang. From these two forces of existence come life’s vital energies and struggles. Adoption is quite like that – not ever knowing one’s creation story, the consequence of one’s birth and identity is the struggle between yin and yang. As an adoptee, there was a mystery in that idea that I found comforting

Though I am not sure how, in meeting Master Zhang, watching her work, the medicine she manifested from the Buddha Field, I realized that help, spiritual and transformative, was coming from an outside source that acknowledged my limitations and suffering even as I deny them. It became clearer to me that I needed to spend time developing a relationship with the world I cannot see; the world that quantum science is paying to attention to; if for no other reason that I am closer to entering it permanently. Our universe is made up of energy, matter and consciousness and humans simply cannot assume that consciousness dies when our bodies die. Matter and energy are not destroyed so why would consciousness? So, I start there, again, but with a different attitude and a promise of commitment that I make to myself. Like most people, I have viewed life through the lens of the senses. If you can’t see it, feel it, smell it, touch it, it doesn’t exist. The owl and watching Master Zhang changed that.

I decided what is needed is to change my perspective, to acknowledge the help coming from outside of my physical reality rather than linger in my half in/half out stance. It has been happening in quiet moments since MZ. Yet, it is bizarre to me that this change is contained within the unfamiliar and foreign terrain of Chinese mythology. Master Zhang’s room was filled with kindness and compassion. They floated like spirits everywhere in the room. It was a visceral, palpable feeling that reason could not explain, nor did I want my reason to do so. I know from sobering up that serenity and grace come from letting go and trusting in a higher power. Practicing letting go has been difficult but trusting a higher source is ever-present even when I am unaware or recalcitrant.

I cannot make time stop or prevent aging but I now have the time to look at life differently.  Aging has it’s challenges but it also releases us from “should” and “have to.” I cannot change the political climate or the climate, climate or impending wars or all the endless problems that face humans today. What I can continue to do with more ardor and passion is to create beauty. Inside and outside of myself, in our house and on the land create beauty and art. Life is art form and done well over decades, it is also a spiritual/religious journey. 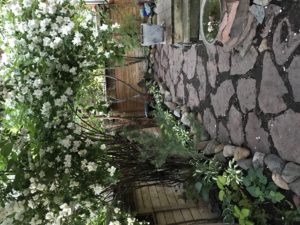 Faith, Who Am I