I was sick.  I had a light case of pneumonia which is an oxymoron as I felt like hell had taken over my body; yet, I had waited almost five years to see Master Zhang and I wasn’t going to let hell hold me back. 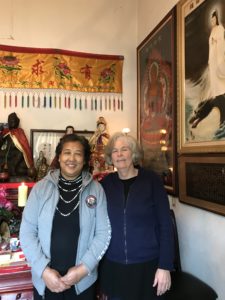 Getting to LA was another hell.  The drive to Sacramento airport was fine.  I had planned to park near the terminal in the short-term parking covered area but it was full.  I had to park in the larger lot, in the rain and wait for the terminal bus. I put my face mask on to protect myself and others from my demon germs and walked to the ticket counter.  I was in first class with a solo seat- another protection. The line through security was so long on a Tuesday afternoon that I used my illness and walked the gauntlet of people waiting to get through a poorly designed and not fully staffed line coughing a raging gurgling sound while people bolted out of my way.

The plane ride was great – bumpy and turbulent but without incident – no engines blew up or dogs dying on this flight.  I got my car, plugged in the directions for Fullerton where I was to meet Victoria and her friend and had cardiac arrest at the alert that indicated it would take me two plus hours because of LA traffic.  I hadn’t eaten.  I figured I would wait and get a quick bite before I was to meet Victoria et al for dinner.  Big mistake!!!

The residence inn was in the middle of nowhere – no stores nearby or restaurants.  Victoria was going to be an hour or more and it was already 6:00 by the time I got there.  I was starving, sick and very tired.  I called Tim and cried because I was starving and sick and very tired.  He walked me through how to survive suggesting that I go back to the front desk and try to find a frozen dinner as I was in a Marriott residence hotel that always has an alcove of shit food for sale.  I found frozen meatloaf with mashed potatoes that only Monsanto could call food.  It was sadly delicious.

Forgoing dinner, I told Victoria I would meet them around 8:00 am and went to bed. A quick breakfast in her suite of eggs and melon and we were off to Master Zhang.

My first introduction to MZ was in Joshua Tree at a Four Winds event in the desert.  She spoke only Mandarin, so her translator conveyed to a group of almost 150 her few words.  I had learned that Alberto Villoldo – Four Winds owner and practicing shaman – had been quite ill, contracting many bugs that linger in the wetness and detritus of the Amazonian jungles.  His brain had been infected, his lungs were shot, and I think his heart needed a transplant.  Master Zhang was recommended to him and he went to LA to work with her in healing himself.  He recounted his story and other stories of incredible healings by her.  All the while, Master Zhang sat quietly, peacefully on the stage, smiling perhaps meditating, unassuming.

She spoke through her interpreter. Though I don’t remember what was said, I do remember the miracle.  At the end of the event, she went into a meditation, her right hand raised above her head, fingers moving as if speaking directly to God.  She had entered the Buddha field I was told – the ineffable space where time and physical matter cease, where prayers to the Buddha and Kuan Yin are heard by those who have dedicated their life to a deep spiritual practice.  From absolutely nowhere that I could discern in the physical, granules manifested from the Buddha field – medicine from grace and spirit.

I am a disbeliever, a cynic, if science can’t explain it, it doesn’t exist type who knows within the deepest reaches of my soul that there is a vastness of spirit, grounded in love and compassion that a few human beings can access while still in the physical but most of us cynics won’t touch until we leave our rotten bodies.  And it was from that field, Master Zhang gave 150 plus a small gift of spiritual medicine from Kuan Yin.

It was at that moment that I selfishly knew that I had to see her.  I had to have her cure my Milroy’s disease.  That was five years or more ago and now sick with pneumonia I was finally getting the chance to see her!

Her house was in a suburb of nicely kept, closely built houses in Fullerton.  It was raining.  Dogs barked next door as we parked in her driveway.  The entrance was under a covered area, we knocked, and she opened the door smiling.  It’s odd not being able to converse in English.  We pointed, and I stared.  She wore a dark track-like suit with grey sweatshirt and a many-strand necklace of white and black beads.  Her smile, as I look back at the pictures, and have since been studying and learning about Kuan Yin, seems to be the radiant peaceful smile that is often displayed on Kuan Yin statues.

There is a room in her house dedicated to Kuan Yin and Buddha where she does her work. It is a temple, an altar to spirit.  There is fruit and chocolate and sweets and flowers and lighted candles, which bring in the spirits to hear our lamentations and prayers and ills.  She had a painting of Kuan Yin riding the sea dragon on one wall that had been given to her from a temple in China that she had carried home on a plane – it was big!  After our session, as others were talking, she was very determined to have me take a picture of Kuan Yin.  I don’t take great iPhone pics and she had me do it 8 times, laughing at my inability with iPhone technology, until I got one that she liked.  She kept pointing at Kuan Yin and then to me several times.  I took that as her wanting me to discover Kuan Yin.  She had seen that I had a couple of Kuan Yin garden art statues in our gardens (did I mention she is clairvoyant and psychic) and it seemed she was trying to convey my unknowing, unacknowledged, unconscious connection to this revered Chinese deity.

I don’t remember all that was said in our session – next time I will tape it – but that may not have been important.  She scanned my body.  My lungs were “shit” though she didn’t say that word. They were damaged and calcified.  I had had my first bout of pneumonia as a two or three-year-old, my second in my thirties and my third at seventy. The gist of what I needed to do was get off the hormones.  She saw the Milroy’s as being centered in the kidney area and the hormones were making it worse and creating the arthritis.  She told me I needed to eat beans every day – beans more than any other food source will build my immunity.  I hate beans I told her and she laughed and scolded me and told me to eat beans.  She told me to drink corn silk tea three times a day – I found it on Starwest botanicals and I drink it every day.  She told me to clear the toxins from the antibiotic overload in my body that I needed to scoop out the innards of an apple and put an egg into it and steam it and eat it every day for 2 weeks.  I have done that, and I still do that as – go figure – a steamed apple with egg is good.

She manifested two medicines from the spirits:  one for my pneumonia and toxins and the other for my Milroys.  The darker medicine was the first for the pneumonia and the lighter for the Milroys.  As I sat within two or three feet of her, hands extended to receive the granules, eyes focused on her fingers talking to Kuan Yin, the granules dropped not from her fingers or her palms but from the invisible to the visible.  It was a miracle!

She had me stand while she stood next to me rubbing my chest and my back in a circular motion, moving the energies in my heart.  As she worked on my body, I began to cry.  The tears seemed to come from pre-birth and for my life to this point – tears of suffering, joy, anger, pain, resentment and love. She knew that acknowledging life’s suffering, for another to see into that suffering and to acknowledge its potent hold is the beginning of healing the physical and mental bodies.

It’s been almost two months since I have seen her.  I am off the hormones and my swelling is greatly reduced, my arthritis less painful, and my tooth infection – the one all dentists wanted to pull, has healed.  These physical manifestations are wonderful.  The most pronounced effect is that Master Zhang seems to be guiding me from her place beyond time.  I have been studying Quan Yin mythology and it is taking me on an interesting journey – to be divulged in future posts.

Faith, Who Am I