Into the Mythic with Jean Houston 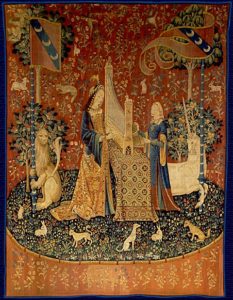 I have been back from Paris for about a month.  I went because I needed to see Giverny in summer and I needed to see great art.  I needed to have an adventure by myself for myself. What I discovered every day that I entered museums or walked the boulevards was an archetypal existence that has been a driving force in my life.  I believe the archetypal urgency was created by my adoption at age three months by a mother who suffered from a mental disorder that was unrecognized sixty years ago and never required hospitalization or medication other than alcohol.  Her inability to mother in any sense of the word instilled a deep need in me to find the mother I never had in whatever form it might or could take.

Life’s challenges, rejections,hardships and joys were the pathways that would lead me beyond my cynicism and judgements if I could open up to something, anything greater than self-pity.  In the most artificial, superficial wasteland in this country, my higher salvation appeared.  It was a metaphor/archetype, a physical metaphor that could not be ignored.  A physical Owl flew into my world and imagination in Westwood, CA and we have been on a thirty-year journey.  The Owl is the mythic aspect of myself writ so large I would have been a fool to deny its meaning or existence.  Thirty years ago I had no mythic frame of reference.  I had seen the PBS series with Bill Moyers and Joseph Campbell, “the Power of Myth” and thought that might be the first place to start.  And so it was.

His work led me to myths and Carl Jung and Angeles Arrien and ultimately to Jean Houston.  She is the absolutely right person to be guiding me at this time in my life.  She worked with Joseph Campbell and was mentored by Margaret Meade.  Her life has been an immersion in myth and archetypes.  She was the cutting edge of the consciousness movement in the 60’s with her late husband, Robert Masters, and she continues to explore how consciousness and archetypes are the language of quantum science.

She says that archetypes are the very principles that hold the world’s wisdom and understanding.  I told Jean when I first started working with her that I wasn’t clear why I needed to work with her but I would start after I returned from Paris.  I had put the cart before the horse because I knew that her time with individual people was limited and that I needed to get her on board before Paris.  Paris was the horse.  The Unicorn tapestries were not just wonders of human thought and art; they spoke to my spiritual self.  Designed in the 15th Century they are beyond-space-time examples for how our 21st Century can heal itself collectively and individually. The old adage that if you want to heal the world you have to heal yourself first is always the place to begin.  To begin the journey with the Mistress/Master of mythology and conscious awareness in a quantum world is a gift from the universe to me for all the years of hard work.

I will be writing the experience with Jean primarily for myself.  I need to create a space for my travels into the tapestries. I need to create a space for Jean’s guidance as I do so.  Many people have said to me how much they would love to work with Jean personally.  Her time is precious.  At 80 years old she still travels the US and Europe doing seminars, she writes and leads private groups at times at her home in Ashland, Oregon.  If people choose to read what I write, it will be an opportunity to experience how she works in the mythic realms.  My intention is to discover why the tapestries called to me on such a deep level and what they have to teach me.  Jean tells me that working with myth and archetypes, we discover that we are characters in the drama of cosmic consciousness, the anima mundi, the “soul of the world.”  She said if we dare to live in the mythic we can heal the world.

Like Loading...
What I learned on my summer vacation! Into Hearing – one of 5 senses in the Tapestries