What I learned on my summer vacation!

Jean Sage Into the Mythic 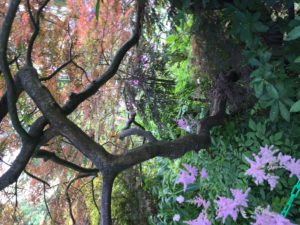 “We cannot change society until we change ourselves”

I sit in a London hotel room with a raging tooth infection that had been quelled before I came to Europe with antibiotics. The pills are gone and the infection is back. The metaphor of my tooth infection and the state of the world rattles around my brain as I wish I could get on a plane and get home to the dentist.

In the 90’s when Hillary Clinton was First Lady, I read about a huge controversy fueled by the press, created by the Republicans and her enemies. Hillary had had the temerity to speak of her association with Jean Houston. She had worked with Jean on it “Takes A Village” and she was – I am extrapolating here as I don’t know Hillary’s mind but I do know working with Jean – questioning and trying to deepen her relationship with her inner being and how that and and a change in perspective could benefit society. She was vilified, called a witch, a new-ager and demonized for looking beyond the boundaries of organized religion and old societal paradigms toward a greater conscious awareness that included the spiritual fulfillment for all people regardless of their religion. Contained within the limitlessness of conscious expansion is a new world order and Hillary, ahead of her time, was trying to figure out how that might be brought to bear on universal health care. We all know how that worked out!

I was intrigued. Who was this Jean Houston person? I picked up her books and started to read about how we needed a new myth for the 21st Century if civilizations are to move us forward. Hillary tried in the 90’s and in 2016, she is still being excoriated and called a liar and being hated more by women than men. She is completely hated by white America and as I study and contemplate the why of it, I understand it. My tooth infection is the messenger of that understanding.
There is probably a seed for change within the metaphoric Hillary Clinton from which a new Oak tree can emerge; however, Donald Trump’s never-ending proclamations that our America is a dystopian society from which he and he alone will make it great again dry up the soil.

My infection is in the implanted tooth. It may have been put in wrong or the crown doesn’t fit properly and is creating problems. Regardless, it has become chronic and needs to be removed. Maybe America’s infections: racism, misogyny, fear, bigotry and stupidity on a massive scale need to fester for a few more years before individual people extract their inner infections. As I read statements from Republicans at the RNC convention, women and men, making American Great Again meant giving up their power to Donald Trump’s promise of preserving their whiteness, the notion of their superiority. Illusion and delusion for within every white person there resides the blackness of their shadow.

I have lived the old myth and it served me well for a time. I was like Don Quixote fighting and blaming antiquated windmills for my ills. This trip to Europe was the beginning of something new. Messengers, energy spirits, whatever their names, were calling me to re-imagine what they had created centuries ago into a 21st Century story for myself and for whoever will listen and participate. The Lady and the Unicorns and Monet have reached beyond the space-time continuum to help.

I have been frustrated and angry that people can’t see what is so obviously needed for change. What the Republicans and Donald Trump are teaching me is that the change I crave starts within me and not through my anger. I got the chance to see and feel the new story in Paris – home is where it begins! 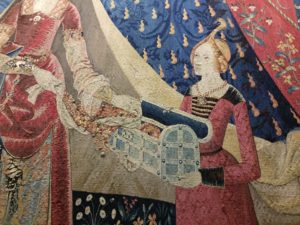