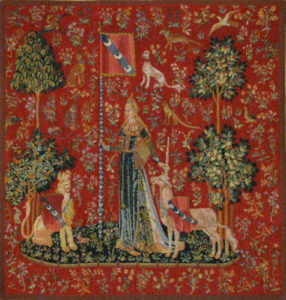 Ariadne and I traveled into touch.  I was curiously apprehensive before and more so after I got there. Ariadne left me immediately saying she had to go as she ran off to the Unicorn.  It’s then I noticed the Lady wasn’t there.  I was very disturbed by that and saw Plato sitting alone with a coat of arms shield draped over him.

You don’t look like you I said.   You look like a goat, I didn’t recognize you at first. What’s happening here.  Everything is different.  It looks like Ariadne is frozen in place. Where’s the Lady and why is Ariadne hold the staff that you usually hold?

Not really, I think I understand why she’s holding the Unicorn’s horn.  I think it’s a replacement for the loss of the Lady here?

Why does that disturb you so?  Who is the Lady to you?

Was there a sense of that for you as a child? He asked.  Where was wisdom’s touch when you were growing up?

With my knowledge now I know that wisdom’s touch was always inside me.  It was my intuition that guided me even as a young girl.  As a young girl however I felt alone.  Like Ariadne there frozen in place hoping perhaps for magic and enchantment; yet, holding onto the staff with the flag of her father’s coat of arms knowing her reality was in that world.  She looks away from the Unicorn as the Unicorn lovingly looks at her. It’s disturbing in a way.  And I notice there are so many more animals and birds here.  The leopard and another cat-like animal with collars and the monkey chained to a pole. It seems to mythologically imply that our childish animal natures must be controlled and contained if we are to become wise.

I think you’re looking at it incorrectly, Plato said.

How should I look at it?

Think about how you were as a child and young girl?  Were you happy when you were controlled and chained to what your family and society expected of you?

Certainly not, I was angry and rebellious but it kept me moving forward.  It was definitely a man’s world when I grew up and I was often told that I couldn’t do something because I was a girl.  I guess you could say I was a chained monkey.

And once you freed yourself from the chains what happened?

I allowed my curiosity to guide me rather than following others expectations of what I should or shouldn’t be or do. Mmm, something just dawned on me.

I love dawns replies Plato winking at me

It seems this tapestry is filled with plants and animals, the trees even the birds soar here. If I become Ariadne however, I am transfixed on the male symbol.  The staff is rather phallic and the flag of my (her) father’s lineage flies at its tip. It seems to me that I am focusing on something that doesn’t serve me while ignoring what does – the unicorn’s magic and I also miss nature’s message.

The earth’s touch is the most potent for humans.  Without it humans would not be alive. You are right, earth is your mother. She gifted you with the Owl. The symbolic bird of transition and wisdom.  the bird who flies between the two worlds, who flies into the darkest of nights to find her sustenance.  You are deeply touched every day of your life by your mother.

Perhaps that is why I live where I live now.  Perhaps that is why when the earth called to me so quietly for so many years, that I finally paid attention and created the garden of symbols behind the house. It’s not only a metaphor for my life but for what is happening on earth now.  When we lose touch with the earth, our mother, we slowly and unwittingly wither and die.

Ariadne’s coming, where too next – do you know?

Here I am, Ariadne happily announces.  I like Touch the least.  I really want to just hug and kiss that Unicorn all the time and I have to pretend that she’s there but not there.  Ah well, let’s go.

talked to Jean today about this and so many other things.  We got off on politics and I told her I see the Trump phenomenon as an example of Jung’s teachings about our shadow side.  I see him as 250 years of America’s collective bigotry, misogyny and white entitlement finally being released.  Perhaps it’s the cleansing we need to move out of the worn-out obsession and addiction to all that

She sees him as the great mythic adventurer – a fractal form of Hitler and Nazism.  He plays the crowd like the savior charging in on his white horse to save everyone and everything.  He never wavers in his admiration of himself.  Hillary who has been demonized and vilified for thirty years fights a massive uphill battle as she attempts to face the 5000 years of deep fear that people have about powerful women.  She is attempting to incorporate HIStory with HERstory.

On an energetic, mythic level the battle between Hillary and Trump is a battle between good and evil; yet, even today many women hate her more than men. I have heard every excuse mostly unjustified as to why:  she’s anti-feminist, she’s too feminist, she’s for corporations, she’s a liar, she’s unlikeable, she’s too shrill.  She’s everything that women hate in strong women and she scares the bejesus out of men. Thirty-five years of bad press, lies and demonizing have been successful.

Jean had me put Hillary into the tapestries.  Where do you see her, she asked.

In touch.  She is with Plato but she is sobbing.  She is immensely tired.  The energy of hate from men and women is almost too much.  Plato asks why she keeps doing it and she says it’s her destiny.

Jean asks where I put her next.  I tell her she belongs in the sixth – Mon Seul Desir.  The sixth tapestry is what spoke loudly to me in the museum.  It is the one that transcends time and space announcing the rise of women has been accomplished.  All eyes are on the Lady as the jewels of truth, wisdom, compassion and kindness for all souls is passed on to the younger woman.  Jean says they are an expression of a Sufi saying “the jewels of unseen generosity.”

Jean tells me to use her entelechy to my entelechy technique.  To employ my higher soul to meet her higher soul in meditation where my higher soul expresses gratitude to hers for having the courage to endure the challenges, to endure the massive negative energy from all corners, to dispel the deep fear of strong, powerful women so the door can be open for the feminine to return in concert with the masculine – no more, no less.

She reminds as well that we are spiritual beings here in human form.  I must be one of the Khan’s reincarnated – Kublai or Genghis doesn’t matter as I want to annihilate stupidity and ignorance in its human form.  I can’t believe at my age I still get all worked up!