Jean Sage Reimagining - What If 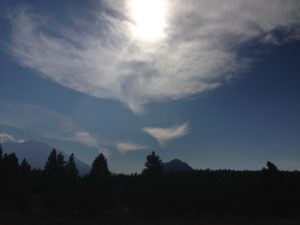 How are Driving Miss Norma and The Revenant the same?

Joseph Conrad’s book “Heart of Darkness” was a tale of European imperialism and colonialism in the Congo Free States at the end of the 19th Century. Coppola retold the tale in his 1979 movie “Apocalypse Now.” Big governments and entities are the metaphors for Kurtz, and the common man/woman are Marlow.

However, so often today “Heart of Darkness” has come to mean an individual’s psychological journey into what Carl Jung called our shadow side. Within our shadows reside our bad behavior, anger, vengefulness and unnamed fears. It’s the unnamed fear that captivates me, my own and others. I am fascinated by an individual’s response to fear. We know how a collective of individuals react to fear – they cheer Donald Trump. I am not interested in how big fear creates a big reaction. I am interested in the low-grade fear that permeates our every day lives.

I am now naming my years. The past two years were my vision quest years. This year is my “heart of darkness” year. I am paying attention to my low-grade fear. I have noticed how I busy myself with activities, any activity to keep it at bay. Regardless, this low-grade fear comes from letting go of every external idea of who I was and am. It starts with my favorite word – fuck! Fuck was and is the moat around my castle. But, fucking the fucking fuckers doesn’t relieve the low-grade fear. In my thirties and forties I was fearless, or so I thought because I had nothing to lose. Losing had a material context back then. I didn’t have enough money to own a house or much else. When a media CEO threatened to sue me over a client contract, I laughed at him and said go ahead – all I have is a sick dog (so fuck the fucking fuckers).   Losing is more than material now. I finally have a home in Shasta, not just a house. Memories, love, partnership are part of every structure. Every plant, each buried dog and the ashes of each person intertwine with who Tim and I are, and we hold on tight because to die means we lose it. But die we must some day and the low-grade fear is a reminder of what we will inevitably lose.

It brings me to Driving Miss Norma and The Revenant. I posted Norma’s Facebook page. She lost her husband of 67 years and was diagnosed with terminal cancer. She had lost everything – or so I extrapolated. She wisely refused chemotherapy, and I am guessing, traveled into her heart of darkness where she transformed her fear into an adventure for whatever time remains to her. The Revenant is a filmmaking masterpiece. Based on the true story of Hugh Glass left for dead in the wilderness by his trapping companions after a bear attack, he resurrects to wreak vengeance on his would-be executioners. In the movie, DiCaprio immerses himself in his character’s heart of darkness transforming his fear into a singularly focused obsession for retribution.  DiCaprio’s character resurrection was based on the need to avenge his son’s murderer. The real Hugh Glass didn’t have a son; thus, his final transformation was not as cinematically dramatic but was as wonderfully sweet as Norma’s. On the real Hugh Glass’s road to perdition, he discovered forgiveness.

I am Marlow seeking to kill my inner Kurtz. I know it will be an adventure this year and I wonder its outcome.

Can Women Save the World?