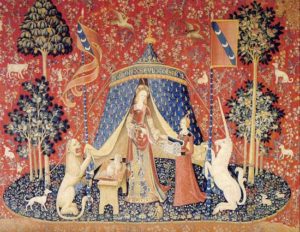 What is the nature of reality? I thought I had a grasp until the 2016 election when I realized I was inhabiting an old Newtonian scientific version of reality that most Americans still believe to be true – that we are just sums of parts of what is visible and what we feel through our physical senses.  For years, I have been trying to understand the dimension of the new quantum mechanics science that even to scientists is bizarre – that relationship is the determiner of everything.  Scientist observed that particles – the subatomic kind – come into form and are observed only as they are in relationship to something else.  These unseen connections between what was thought to be separate entities were and are the fundamental ingredients of all creation.

Thank God for the tapestries for they and quantum physics have taught me about fields (the quantum kind) – invisible forces that occupy space and influence behavior. The force field of the tapestries influenced – to one degree or another – everyone who entered the darkened room at the Cluny.  I observed the awe on people’s faces, the hushed tones in which they spoke if they spoke at all. As I sat in the cool quiet of that room surrounded by a force field that transcended time and space, I allowed my imagination to carry me beyond that circumstance into a deeper dimension of consciousness to discover answers to what I thought of as reality.

I realized that what we have collectively experienced in 2016 is contained within the quantum’s “chaos theory.”  It also applies to each person’s internal chaotic process. To appreciate the relationship between order and chaos, we must understand that these two states mirror each other. “A system can descend into chaos and unpredictability, yet within that state of chaos the system is held within boundaries that are well-ordered and predictable.  Without the partnering of these two great forces, no change or progress is possible.  Chaos is necessary to new creative ordering.”

I have no idea if our political system can survive the chaos of Donald Trump or a Republican congress as I am not sure they are held within boundaries that are well-ordered and predictable.  What I am sure of is people with a higher sense of purpose and sensibility are more in tune with the quantum philosophy – that we live in a connected world and universe. We are part of a unified field. We are in a holistic force field that engages us to understand that we cannot alone trust facts or statistics or people who ridicule solutions that are not aligned with their belief system or their greed. Imagination and intuition, reflection and the creative possibilities within the psyche are not dangerous or silly and partnered with facts and statistics can reorganize society into a higher level of organizational understanding. On a personal level, the suffering we feel during times of chaos helps us push through boundaries we didn’t think we could stand to transform and heal our suffering.

My imagination allowed me to travel back in time to the 1400’s when the tapestries were made.  I imagined one person – the woman – who was married to the aristocrat who commissioned the tapestries.  She appealed to his vanity as a nouveau riche businessman who needed and wanted to impress the French royalty of this wealth and stature.  Do something different than all the others she implored him.  Most of the tapestry scenes from that period had the man of the manor on horseback winning battles, taking over towns, declaring their manliness and stature through killing and war.  As he adored her above anyone else and admired her faith in God and her love and devotion to the natural world, he commissioned a love letter embroidered in all the physical senses.  She was magic and mystery to him. He knew her belief in something higher and more powerful than herself or the physical world was something he didn’t fully understand but something he had to celebrate.

The weavers of the tapestries knew as well that this commission was unlike any other. They didn’t know about a unified field then, an afterlife for them was based on punishment, repression, and following the orders of the church if it was to be remotely glorious. Yet, somehow, they transcended into a higher state of consciousness as they wove the tapestries. Quantum science has proved what mystics have known for centuries that there is a deep dimension beyond the space/time continuum where all knowledge, past present and future resides.

My imagination allowed me to touch and feel their intention.  I became the woman whose message for all ages and through the ages was in the metaphoric jewels she shared with the young girl. They are the jewels of consciousness, wisdom and creativity that must never be surrendered to a lower or lowest common denominator.

I love approaching 70 because I have the freedom and fearlessness to pursue dormant inner resources and the time to figure out how to use them.  We spend most of our lives trying to conform to a world that believes it knows what is best for us.  It’s a Newtonian world however and my parts no longer fit into its sum.  All change results from a change of meaning and the old biblical parable is more relevant now than ever – for those who have eyes to see, let them see; for those who have ears to hear, let them listen; for those who have neither, let them pass on.”

We desperately need to create a new story based upon the new language of quantum science that explores, quantifies and qualifies that we are all connected to a deeper dimension. Joseph Campbell said when we lose our story, our creation myth, a society dies.  Imagining a new world into being is a beginning.

My new story, the story for the re-creation of myself heading into my 70’s and beyond, is the story of the sixth tapestry.  Mon Seul Desir – my heart’s desire led me beyond my heart’s desire into my soul’s desire.  I can pass the jewels of consciousness and wisdom on to others as they are now integrally and internally part of me.  The unicorn and the lioness are the metaphoric electrons and protons that ignite the creative power of my invisible atomic self.

It has been an incredible gift allowing my imagination to take me into each tapestry where I discovered the changes I need to make because I changed the meaning of my life.  I highly recommend to all to find an ancient painting, a poem, and photograph, a work of art that resonates so strongly within you that you allow your imagination to enter that circumstance to discover – whatever you need.

Like Loading...
There is a way out and through it all Quantum Science & Why I Am Grateful to Donald Trump!