The Essence of the Unicorn 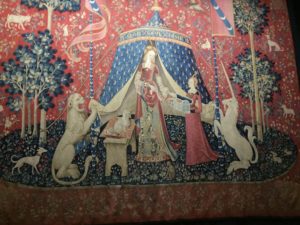 Yesterday I went to the Pompidou Center. It is a remarkably designed building. The tubes on the outside contain escalators that take people to the floors of the exhibits. Nothing in Paris is air-conditioned so the tubes on this hot and muggy day were stiflingly and dense. The view of the city however was the opposite. It was more intimate than the Eiffel Tower or the big Wheel as it rises 10 stories perhaps with a 360 degree unobstructed view. The exhibits were stunningly displayed. The sculptures outside on the 5th floor were cemented in a black floor that looked like a pond. There was an inch or two of water cycling in and around that gave the impression of Art in water. The pigeons loved it. They could fly in, walk around to cool off, get a drink and fly off.

Kandinsky, Matisse, Picasso, Braque, Paul Klee – all masters of cubist and modern art. To see the paintings and sculptures in person rather than a book from my Art History class at Rosemary Hall was transcending. The Pompidou, D’Orsay, Cluny and Picasso museums are intimate gatherings of unimaginable beauty and symbols of mankind’s great achievements of creativity and higher purpose.

In stark contrast, the streets are filthy with cigarette butts, the air choked with smoke from people addicted to thinness and tobacco. Terrorists attacks have put the city on high-alert. Every day as I turn the corner to walk down the Rue Sainte-Honore, I am greeted by armed police. Two or three either redirecting traffic or standing in front of guard rails with their fingers close to the trigger of their Sig Sauers. I am near the Elysee Palace – the official house of the president – the Paris White House I suppose. Parisians are quite “laissez-faire” about the whole thing. It has become a fact of their life that insane people want to blow up portions of their city where lots of people congregate. Unlike Americans, however, they don’t hysterically pander to the fear that lies within as they recognize that fear is more destructive than ad hoc terrorism. Because WWII was real and palpable in this city, because Hitler was a reality who stood on the steps of their buildings and whose troops marched down the Champs D’Elysee like the Devil entering Paradise, they know real fear and the memories of that reality linger.

People of Muslim faith are everywhere. Walking the Champs D’Elysee, Muslim families are predominant as are the Muslim women begging lying face down on the sidewalk arms outstretched holding begging cups. Entire families of refugees sitting respectfully in front of buildings with small children in their laps beg as well. They are the product of Isis – fleeing their countries, coming to Paris with no job, no home, no resources except to rely on the kindnesses of strangers

I read the home papers – NY Times, Huff Po and others – keeping me informed of the utter insanity that is America. It looks like our entire country has become deranged from this distance and perspective. I read the French papers – I am getting pretty good at reading French – and their headlines of US news make our country look like a fragile, declining Superpower on the brink of electing a Hitlerish demagogic cartoon orange character to be our next president. It is mind-boggling to Europeans who in the wake of Brexit fear for us and themselves. I have been asked by Joseph – my Air BNB apartment host – and a few others why America is so afraid of women, so afraid to elect a woman. I tell him and them it’s not over yet but that the most frightening thing in our country is the number of women who demonize Hillary Clinton, who have drunk the decades of “cool-aid” demonization of her and call it truth.

Most importantly, I came because I was called to see Giverny in the summer and I was called, without my knowing it and until I saw them, to the Unicorn tapestries. Woven in the 15th Century, they speak allegorically, metaphorically to this time in mankind’s history. I believe they were woven for this 21st Century. The most famous “Mon Seul Coeur” – my heart’s desire tells a silk and wool story, every thread a plea and a prayer, a mythic journey into the essence of greatness that lies within each and every person ever born and ever will be born. It is a woman who weaves this tale protected by the male lion and given strength and courage to dream a new world into being by the presence of the Unicorn. 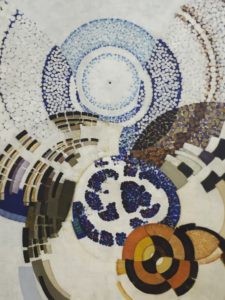 In search of essence – still!!! What I learned on my summer vacation!